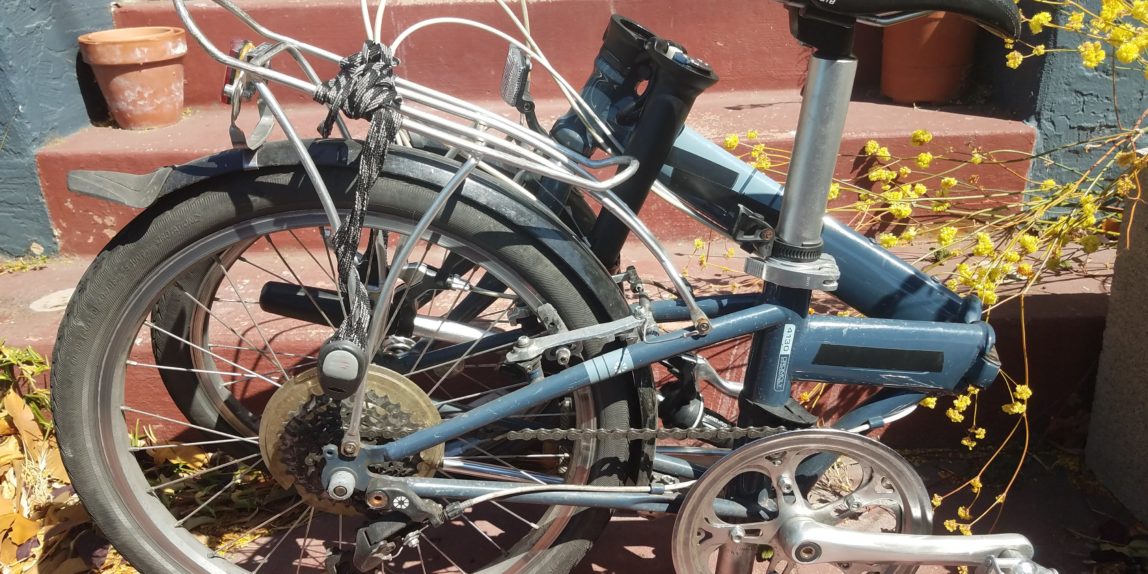 A cliched formula for determining a cyclist’s ideal number of bicycles:

Where n is the number of bikes currently in possession.

Like most jokes, this one is often all too real. Despite being rabidly anti-consumption, I found myself caught in the trap. At my lowest point, I had a stable of ¡6! bikes. 6 bikes is reasonable if you have a road bike, a mountain bike, a beater for town, a triathlon bike, etc., provided you have a use for each of them. In my case, all but one (pic above) were essentially the same thing – old mountain bikes. The only mitigating factor was that all were second-hand.

I try to convince myself that I had a decent reason for such excess. Here goes!

I’ve been into backpacking for much of my adult life, taking every opportunity to embark on backcountry jaunts. I’ve enjoyed riding bikes since I was a kid, but had never gone beyond daily bike commuting and occasional single track. I yearned for more – I was inspired by a friend who regularly travels real distances (automobile-scale) on his bike, and by others who have undertaken long-term bike travel.

In early 2019, I finally read about something that had become popular over the past decade – bikepacking. It combines the most appealing aspects of backpacking and biking: backcountry jaunting and covering long distances. I immediately became obsessed with building a bikepacking machine.

I could have spent thousands of dollars on a modern bicycle designed for bikepacking. I’m not sure if I’m anti-consumption because I’m cheap, or cheap because I’m anti-consumption, or if the two traits are totally independent, but that distinction is academic. My priority was to do this for the least cash, with as few new parts as possible. I knew that a nice steel mountain bike frame from the 90’s would more than suffice.

Pre-COVID19, bargains abounded on Craigslist. People were always cleaning out their garages and selling beautiful vintage bikes as scrap. The only catch was that they often required some TLC. I had three simple requirements:

Finding this ~1996 Jamis Diablo was a huge dopamine rush. The original owner, who had long ago upgraded to modern mountain bikes, sold it to me for a song.

It was rideable, just barely. I replaced the rear derailleur jockey pulleys, replaced the cassette and chain, replaced shift and brake cables/housing, dialed in the shifting and braking, and installed new tubes. I had to spend hours watching Youtube videos and failing (aka “learning”) because the only thing I had done correctly in the past was replacing tubes. I also deep-cleaned everything and sanded, primed and painted all scuffs and scratches on the frame to prevent rust.

After what must have been tens of hours of learning and labor, I was ready for the final step – replacing the suspension fork with rigid. I knew exactly what I needed: a rigid steel fork with threadless steerer, at least 7″ steerer length, and both rim and disc brake mounts. After months of scouring Craigslist, an amazing deal appeared and, miraculously, I was the first in line. In case I had missed something, I brought my old fork to compare with the seller’s. To my astonishment, the steerer diameters were different. Mine was slightly smaller!

I left empty-handed. On the way home, I slapped myself; I should’ve bought the fork anyway. It could be useful, and worst-case scenario, I’d sell it for a profit. But it was too late – sold. There’s a Chinese saying for these situations – “交了學費”, which approximately means “let it go, it’s a tuition fee for learning that lesson”. It was a cascade of failure. Ignorance, complacency, lazy due diligence, all that time cleaning and painting the frame, the cost of all those replacement components, and , to top it off, choking at the buzzer and missing the most remarkable Craigslist find of my life.